How to Improve Your Video Presence

“Ok, that was good. But let’s make it a little more conversational this time,” I said as the person across from me shifted uncomfortably in his seat. He took a big gulp of his water and sighed, dreading his next take.

We were shooting a video with a partner at a “Big 4” firm. This was someone who could hold his own in a conference room full of corporate executives or charm the socks off an audience at a global summit. And yet, you put him in front of a video camera and he completely lost his nerve.

And he wasn’t the only one…

Almost all our clients have that problem – they can connect with an audience in-person, but not in the same way through video.

Why is that?
Don’t public speaking and speaking to a camera require the same presence and skillset?

Don’t public speaking and speaking to a camera require the same presence and skillset? Well, not exactly.

As a YouTuber, video marketer, and a proud member of the Austin Toastmasters Club, I’ve dabbled in speaking both on and off-camera. And perhaps the best way to illustrate the difference between the two is through the following scenarios:

Here are 5 tips for navigating the difference between good video presence and good public speaking – remember the acronym “STARE”.

Script. Unless you’re magically gifted, most muggles rely on a script for public speaking — one with a clear beginning, middle, and end. With video, on the other hand, it’s all about seeming natural and conversational. Sure, a script is still important for structure. But like any reality tv show, the key is to not SOUND scripted.

Tone. When public speaking, you want your tone to reflect a level of expertise and credibility. Because of this, your delivery may have a bit of polish to it. With video, on the other hand, you’re going for maximum relatability. Simplify your language, make your tone casual and conversational. And if you have an occasional “umm” or “like”, don’t sweat it!

Audience. In a public speaking setting with a live audience, you get to make eye contact, gauge people’s reactions in real-time, and feed off their energy. And for the most part they won’t get up and leave 10 seconds into your speech. With video, on the other hand, it’s important to remember that you’re speaking to an audience of one. Plus, you have to earn your audience’s trust and attention. If they’re not convinced, they’ll stop watching within the first 10 seconds. Before you try selling them on a product or idea, you must first show your audience why they should trust you. So start with being their friend first.

Rate. Good public speakers know to slow it down and have dramatic pauses to allow the audience to really soak up the information and hold their attention. With video, on the other hand, talking slowly and deliberately is a great way to bore your audience. People have short attention spans, especially on social media. So you want to be snappy, punchy, and talk faster than your normal rate.

Emotion. Of course, emotion is necessary both on and off camera. But for video you need to consider 2 things — the camera doesn’t pick up emotion as well. Secondly, you can’t feed off of the audience’s energy. So you really have to play up the emotions – be much louder and more pronounced.

Mastering your video presence can seem daunting. But at the end of the day, it really is like having a conversation with the person you feel the most comfortable with. So go out there and STARE greatly. You’ve got this! 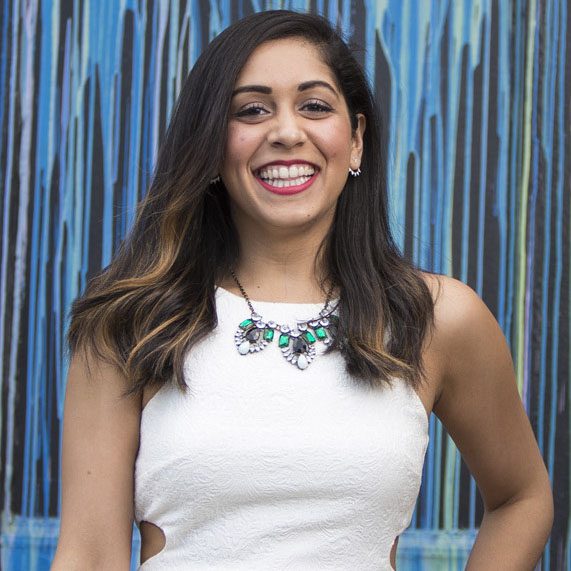 Nammy Sirur is the cofounder of MisFit Communications and The 9to5 MisFits. In addition to making boring things fun through video, she’s a content writer, public speaker, and fledgling TikToker (though she’s pretty sure she’s already aged out by using the term “fledgling TikToker”).

Connect with her on LinkedIn to learn how to make videos that get you noticed and build trust with your audience.