What is Servant Leadership? - Skybound Coaching and Training
Skip to content 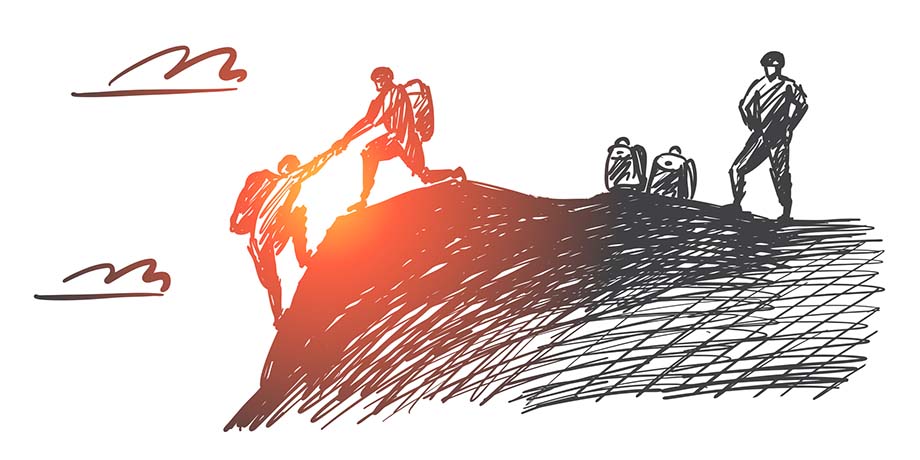 In years past, leaders were viewed as the individuals in organizations who had all the authority, made the decisions, took control, and gave orders. Employees were there to serve the leader and the company’s goals.

This “command and control,” authoritarian notion of leadership isn’t as common and accepted today, and with good reason — It creates a disengaged, disempowered, and less innovative workforce over time. No 21st-century company can survive in a competitive market without maximizing the potential of their people and harnessing the energy, ideas, and discretionary effort of their employees.

What other approaches to leadership might be more impactful and effective? Let’s consider servant leadership. You may have heard the term, but what does it really mean in practice?

What is Servant Leadership?

At first, servant leadership may seem like an oxymoron. In this leadership philosophy, the primary focus of the leader is to serve those around them. In other words, a leader focuses their actions on helping others within their organization grow and thrive. While traditional leaders retain authority and control, a servant leader shares that power. This leader still wants to see their project or company succeed, but they achieve success by building up others first.

It is important to note that the inversion of roles does not mean that the ultimate goals of a servant leader are inherently different. Servant leaders still seek high-level organizational growth. This can include achieving objectives, growing revenue, increasing the client base, and more. The concept merely seeks to make such progress through a different method. In a servant leadership model, it is believed that it is possible to boost wider success by boosting the success of individuals.

A servant leader focuses their actions on helping others within their organization grow and thrive.

The History of Servant Leadership

Although servant leaders have shown up in various contexts throughout history, the concept wasn’t fully articulated in business until 1970 when Robert K. Greenleaf wrote an essay in which he first coined the term “servant leadership.”

In Greenleaf’s conceptualization, leaders are not set apart from their followers. Instead, the best leaders are people with which others can identify. In this manner, servant leaders work alongside others, and they build up an organization by supporting the team in the achievement of shared goals.

Greenleaf pointed-out that a servant leader should ask themselves:

Do those I serve grow as persons? Do they, while being served, become healthier, wiser, freer, more autonomous, and more likely themselves to become servants?

Greenleaf put his ideas into practice during his own career. While he served as an executive at AT&T, he embraced a servant leadership style. Several decades later, in the 1990s, researchers began exploring the idea more deeply. The first peer-reviewed study was released in 1998. In 2008, two critical studies were published to cement the idea as a meaningful and effective leadership method in the business world.

10 Characteristics of a Servant Leader

Humility: This is at the core of a servant leadership philosophy since this type of leader is focused more on helping others be successful than advancing their own reputation or career. Servant leaders temper their own ego and recognize the value of sharing power and collaborating to achieve goals.

Self-Awareness: To support others well, servant leaders need to understand what impact their words and actions have on those around them. This requires the willingness to observe oneself, ask for peer feedback, and reflect on ways to improve.

Empowering Others: Servant leaders don’t give orders or micromanage, but they give people the chance to truly own projects, learn new things, and make their own decisions.

Open Mindset: Empowering others requires that a leader is truly open to other perspectives, ideas, and ways of addressing goals and challenges. Servant leaders realize that their ideas aren’t always the best. They see the value in diversity of thought and trust that outcomes will be better if there are more perspectives in the mix.

Trust-Building: In order to help others grow and thrive, a servant leader has to know about their employees’ needs, preferences, and motivations. To understand these elements, leaders must foster genuine rapport and trust through proactively creating authentic personal connections.

Listening: A hierarchical or command-and-control type of leader will often be the loudest voice in the room. However, a servant leader starts by listening. They’ve honed their ability to be present and curious, and to even listen at deeper levels to catch non-verbal communication.

Empathy: A true servant leader will not just listen to others. They’ll walk in another person’s shoes, seeking to understand their thoughts and feelings. This helps colleagues feel seen, heard, valued, and appreciated.

Coaching: Serving others means being able to take a coach-like approach with employees. Instead of teaching or advice-giving, a coaching style involves guiding someone to find their own answers and solutions. This is done by employing a collection of coaching skills such as active listening, sharing observations, asking open-ended questions, and facilitating action planning. When an employee is coached, they leave with new insights, growth, and a sense of empowerment.

Facilitating: When servant leaders hold a team meeting or problem-solving session, they play the role of facilitator rather than expert. In the facilitator stance, leaders create the right conditions and shape a process for the team to solve the problem rather than coming in with a proposed solution and asking for feedback.

Influencing: In a traditional leadership model, leaders give orders that are obeyed. This can seem efficient on its face, but ultimately stymies the motivation and potential of employees. A servant leader focuses more on having influence. Instead of giving orders, these leaders work to create consensus and gain collective buy-in.